Monastery Zograf is erected among tall trees at the foot of a wooded hill rising from the western coast of the peninsula. The monastery is dedicated to the Holy Great Martyr George.

Zograf was founded during the reign of Emperor Leo the Wise (886-912) by three Bulgarian brothers from Ohrid of Bulgaria. Brothers – monks Moses, Aaron and John, could not come to an agreement about the name of the monastery temble. To solve this problem, they put a clean icon board on the altar and agreed to dedicate the temple to that saint whose image will appear on it. They served the all-night vigil, praying for the fulfillment of the will of God, and after looking at the icon, they saw on it the image of St. George.

At the same time in the Holy Land in the monastery of Fanuel, near Lydda, where the holy Great Martyr George was born, the brethren, kneeling down for prayer before the image of St. George, suddenly saw the saint come down from the icon and disappear. Soon the prior dreamed of St. George. The saint showed him that the disappeared image is now embodied in an Athonite monastery. 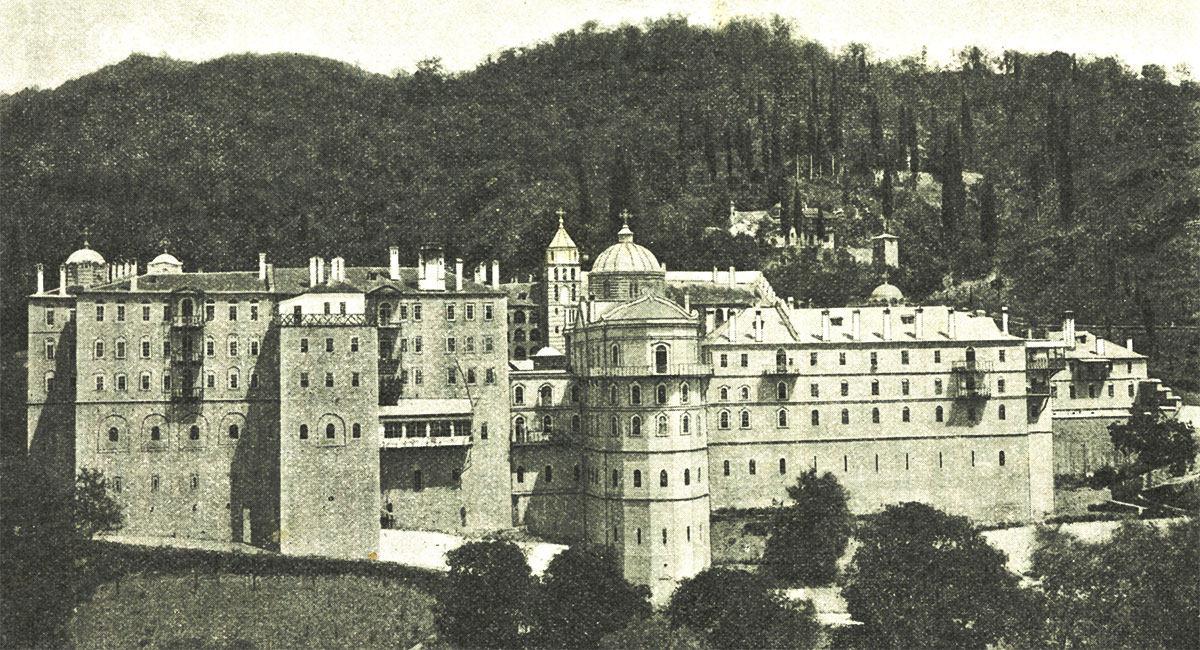 After such a wonderful finding of a name, the monastery was called Zograf (“Artist”). Under the left eye of St. George, on the cheek, you can see the fingertip of bishop Vodei, who, not believing the story about this miracle, tapped his fingertip with a disdainful way. His fingertip leave forever on the icon.

By a strange coincidence, the Emperor Michael Palaeologus, generously pouring out his mercies on Zograf at the end of the XIII century, together with Patriarch John Vekk did his best to force the inhabitants of the Holy Mountain to accept the union with Rome. On October 10.1276, twenty-six of the local monks refused to obey, locked in a monastery tower and were burned alive by the soldiers of the Emperor.

In the second half of the XVIII century in Zograf lived a famous Bulgarian writer – Father Paisiy, author of “The History of the Bulgarian Folk”. In 1845, the Bulgarians received official confirmation of their traditionally sanctified advantage in the rights of possession of the monastery. The monastery is still Bulgarian, although there are very few Bulgarian monks left there.

On this icon, as on the other two, the Holy Great Martyr is depicted not on horseback, but simply with a spear in his hands, in a military armor, in a perfectly quiet position. Chasuble on the icon is made in St. Petersburg, with the blessing of Metropolitan Seraphim. Another miraculous icon of the Holy Great Martyr miraculously arrived by waves from Arabia and stopped at the pier of the Vatopedi monastery. The third miraculous icon of the Holy Great Martyr is told: when the Turks pounced on and destryed the Byzantine Empire, Moldavlahia was governed by Governor Stephen 4, nicknamed Great or Good. In a fit of compassion and love for the Orthodox, he prayed and often kneeled down before the icon of St. George. One day, the great martyr George appeared to him in a dream and promising help him, he said: “I will be with you and for you, take my icon from your mother and she will be the pledge of your victories over the enemy. Only after the end of your military victories leave it forever in the Zograf monastery. “

In the monastery are also kept two glorified icons of the Virgin Akafistos and Epakouousa (“Responding to prayers”). With the first icon associated the following tradition: in one of the monasteries of Zograf lived an old monk who continuously read the akathist to the Theotokos. One day he heard She said, “… Tell the brethren and the abbot that the enemies of My Son are approaching. Let all who are weak in spirit and do not have the proper virtue of patience, will disappear from the monastery until this temptation is over. Those who wish to receive a martyr’s crown, let remain in the monastery. ” An old monk did everything, she told, and those monks shut themselves in the tower were burned by the Patriarch’s troops. The icon of the Virgin was found unscathed under the ashes of a burned tower.

In the monastery there are parts of the tree of the Life-Giving Cross of the Lord, the relics of St. Andrew the Apostle, the holy First Martyr Stephen, the Great Martyr George, part of the relics of St. Athanasius, Patriarch Alexandria, St. Varlaam, St. Antipas, St. Nikita, Evangelist Matthew and other saints.

Today in the monastery there are about 10 monks.