The Russian monastery of St. Great Martyr Panteleimon is on the western coast of the Athos peninsula between Xiropotamos and Xenophon monasteries. The monastery is celibate a feast day on July 27. Over the centuries, this monastery has a lot of Russian monks, because of which it is often called simply “Russik”.

The monastery was founded in the times of Prince Vladimir Equal-to-the-Apostles and his son Yaroslav, as mentioned in the History of the Russian State. It contains manuscripts of Russian tsars and the All-Russian Patriarch Job. The rules in the monastery are obided by the terms since olden days established by the holy fathers for the common organization brethren: nothing to consider as their own, but to have everything in common.

Originally the monastery of St. Panteleimon, otherwise called Thessalian, stood in place, now known as Paleomonastirion (that is, the old monastery). It was built by a rich Christian from Thessaly. At first, Greeks and Russian monks lived in it, and there were more Greeks, but after the liberation of Rus from the Tatar-Mongol yoke, it filled with Russian monks, who were eager for spiritual achievement. The heyday did not continue long, and the monastery faced with great economic difficulties. To somehow exist, the monastery is forced to borrow money, pledging monastic property and valuable liturgical utensils. In the middle of the XVIII century the monastery was closed completely. Russian traveler and writer of XVIII century named Barsky said that at his first visit to the monastery he found four monks there – two Russians and two Bulgarians, and once again, he found that the monastery was completely empty. In the best times in the monastery of St. Panteleimon, there were up to three thousand monks. 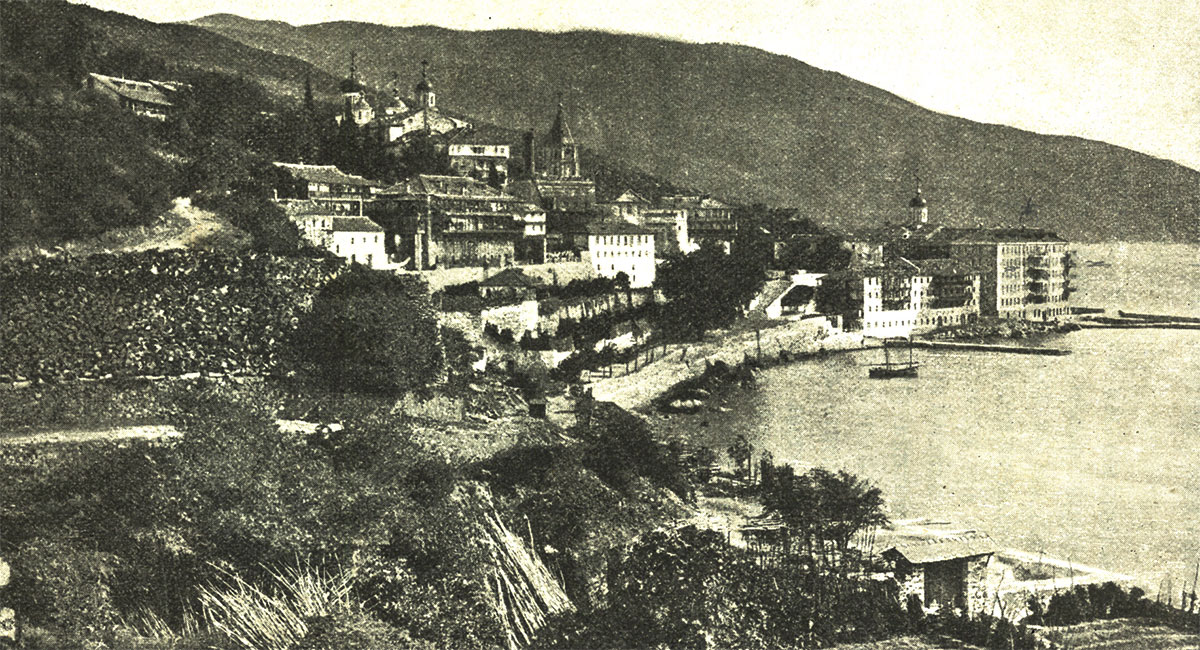 Between 1800 and 1820, the monks left the dilapidated buildings and decided to move to a new place, closer to the sea, where is the monastery currently located. The new monastery received the status of cinematography, and in 1840 again began to accept Russians. The Russians began to come in such numbers that soon the Russian monk became prior, and some time later the monastery was in Russian hands entirely. The generous gifts and donations of the Russian Imperial Family contributed to the rapid revival of the monastery, and by the end of the XIX century more than a thousand monks from Russia lived there. Natives of Russia settled throughout the peninsula.

The cathedral construction of the monastery of St. Great Martyr Panteleimon was completed in 1821. It is crowned with typically Russian onions domes and gilded crosses. According to the decree of 1875, the services here are conducted in the Church Slavonic and Greek languages. Near the cathedral stands a huge, building of the refectory decorated with frescoes for eight hundreds people. Above the entrance to the refectory there is a bell tower (1893) with a bell, the second largest in the world, weighing 13000 kg.

The richest library contains 20000 book tomes of Greek and Slavic printed editions of the XI–XIX centuries. The monastery also owns a large number of small temples and chapels, many of which are dedicated to Russian saints.

Today in the monastery there are about 40 monks. The number of brethren can increase dramatically if Athos government permits to move to monks from Russia here. More than five thousand applications have been received from Russians wishing to become residents of the Panteleimon Monastery, however, according to the ancient edict, designed to protect the right of the Greek monks to hold the monasteries lowful possession of Αthos monks, the number of the monastery’s brothren should not exceed the number of monks of the nearby Xiropotam monastery, which now has only fifty people.

To the shrines of the monastery relates the stone from the monument of Lord, the head of St. Panteleimon. Also here are the relics of St. John the Baptist, the holy Apostles Peter, Andrew, Matthew, Bartholomew, Thomas, Barnabas, Prokhor, St. Luke, St. Gregory Palamas and St. Silvan, the amazing elder of our time (1866-1938).