Monastery of the Great Laura of St. Athanasius

The Great Lavra is the oldest and largest of the Holy Mountain monasteries. It is located on a rocky ledge, where the mountains descend to the sea. From the slope of the mountain you can see a walled medieval town, in the northern part of which towers a wide white tower, buildings where are placed cells with several floors. From the entrance with the iron door there is a narrow path leading to the courtyard of the monastery, where the refectory is located.

The monastery was founded in 963 by reverend St. Athanasius. Reverend Athanasius and with him, several more monks died, checking how the roof of this temple was going: the brickwork under them collapsed, and they fell to the ground and crashed to death. The construction was financed by the Byzantine emperor Nicephorus Fock. In the best years there were more than seven hundred monks in it. In the courtyard of the monastery there is a cathedral, which was built in honor of the Annunciation of the Blessed Virgin. The frescoes of this temple are among the most perfect icon-painting works on Athos. Inside the temple there are two chapels, in one of them there is a ciborium with the relics of St. Athanasius, the second is dedicated to St. Nicholas the Wonderworker. 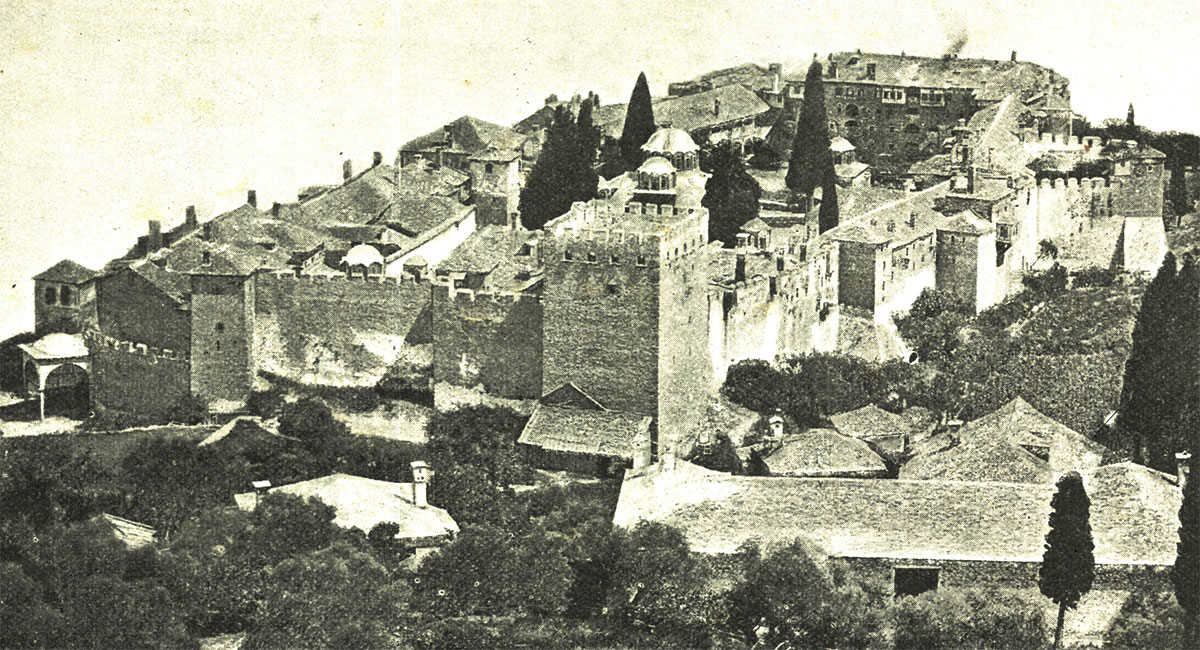 Besides, the relics of the saints are kept in the monastery, including the relics of St. Basil the Great, St. John Chrysostom, Monk Ephrem the Syrian, monk Nil Mirotochivy, as well as one of the largest preserved fragments of the True Cross of the Lord, about 20 centimeters long. It is stored in a silver box decorated with diamonds, emeralds, pearls and medallions with images of saints. Here are stored miraculous icons “Economissa” and “Kukuzelissa”.

Near the temple stands a white-red stone phial – baptismal – the largest on Athos vessel for the consecration of water. Here, the water is illuminated at the beginning of each month. The baptismal was built in 1030. On the baptismal there is a wallpainting “Baptism of the Lord”. Over it grow two thousand-year-old cypress trees, planted, according to legend, by the Saint Athanasius.

The Great Lavra has three monasteries: Righteous Anna, Kavsokalivia, Moldavian monastery-Prodromos. The largest and oldest on the peninsula is the Skete of Anna’s Righteous. The main shrine of this monastery is the left foot of the holy Righteous Anna, Mother of the Blessed Virgin. Skete Kavsakaliviya (translated as “arsonist of huts”) received the name from the Monk Maxim Kavsokalivit. His love for solitude was so great that whenever he saw that some other monk was going to settle near him, he burned his house, climbed higher up the mountain, and there he built himself a new one. Skete Prodromos in the middle of the XIX century was sold to Moldovan monks.

The neighboring territory is called Eremos. It is located on the lower slopes of Mount Athos. Here are the following cells: Kerasia, St. Basil, Katonakia and Karul. Karul inspires the pilgrim with extraordinary reverence, as the local hermit monks conduct a strictly ascetic way of life and spend most of their time in prayer.

Today the monastery is inhabited by 45 monks.